During our ’97 tour of Rajasthan, we visited the fabulous Jain temples at Ranakpur. After lunch at a nearby hotel, while photographing a colourful bird in the hotel’s garden, I found someone looking over my shoulder. It was a boy - aged nearly 14, named Lajpal, he told me in halting English.

I took his photo, he wrote down his address. On our return to the UK, I sent him his photograph. Six months later, it came back - address unknown. So, I sent the photo to the hotel manager, asking if he knew this boy. It turned out to be his nephew. 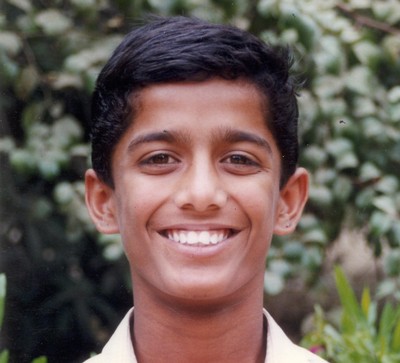 Lajpal in 1997, aged 14, in the grounds of the Maharani Bagh Orchard Retreat, near Ranakpur

A brief thank you letter from Lajpal followed and, in subsequent exchanges of correspondence, his command of English and my understanding of his background continued to improve. I was as intrigued to learn about his way of life as he was about things in England.

A couple of years passed before one letter mentioned how he wished he could have a better education and how his family was unable to support extra tuition. I couldn’t hope to help all of India’s needy, but here was an opportunity to make a direct difference to the life of at least one deserving soul. A small amount of money goes a long way in a country where the average income is little more than a few hundred pounds a year!

For fifty quid he was able to have all the extra coaching he needed for several months. I later discovered how he’d used the funds: he’d study from 6.00a.m. to 2.00p.m.at his village school, then have some lunch, before walking 4kms to his first paid-for lesson (Maths); an hour-and-a-half later, he’d walk another 3kms to a two-hour Chemistry lesson; after that, he’d walk a further 2kms to an hour-long Physics lesson, before eventually walking home. He’d do that five days a week. The boy was an educationaholic! At the end of the year, he was awarded a coveted gold medal for being the best boy in his school based on achievements in education, sports (he’s a keen cricketer) and cultural activities. His nickname - all Indian boys have them - became Goldy!

With very modest additional support, Goldy was able to go onto further education, changing his mind about becoming an engineer and opting for something in the armed forces or civil service instead. He passed written exams for the army and air force with ease. He was in the final twenty from 140 applicants at a recent selection board for air force pilots but, alas, wasn’t one of only two trainees selected. Now 22, he’s about to take what should be his final academic exams at the end of December, then some competition exams in February, followed by interviews in March. He hopes to take up employment soon after. His parents must be very proud of him. 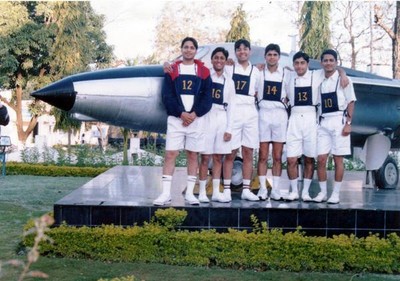 A pilot? Lajpal at the air force selection board - far right, wearing number 10.

We’ve only met once. We’ve spoken on the telephone twice. We’ve written letters to each other frequently and, I guess, we’ve come to know each other a bit like distant cousins. He's often asked “when are you coming to visit me?”. I’ve just as frequently made excuses about family commitments and having to save the money!

In one of his early letters, he wrote:

“Life is like an ice-cream. Enjoy it before it melts.”

A dear friend’s death from cancer earlier this year and others needing medical treatment in recent months, together with our own advancing years, have prompted me and Pat to take positive steps to enjoy that ice-cream and to see more of the world before we leave it.

So, on 1 January, my first step of 2006 will be to fly to Delhi, then on by road to Jaipur, where I'll meet Lajpal again after eight years. It’s also a unique opportunity for me to see India through Indian eyes.

Previous Next Table of contents

I came to this by a roundabout route from your 2013 Bharata blog. I think it's wonderful that you were able to keep in touch with your young friends and help him with his studies in this way!

Sarah, thank you. Since this blog was first published, my association with this young man has continued. With a little financial help towards his university expenses, he went on to gain a BA in Political Science and a Post-graduate Diploma in the same subject, and he is now a local government officer. I am very proud of all he has achieved.

He accompanied me on this Goa trip and on a tour of South India (https://keralawithpintu.travellerspoint.com/1/).

Inevitably, I've become an honorary member of his family and meet many aunts, uncles, cousins on every visit to the country. I attended his marriage in 2012 (https://pintusmarriage.travellerspoint.com/1/)and brought him to the UK in 2014 for a holiday with me and my wife. He's become known to my own family and friends as 'my Indian son'!

Our association is not just one-sided. He has introduced me to people, places and cultures in his country that I might never have known about. I now liken my experience of his country to being at a theatre. I used to be in the audience. Now, I'm backstage and seeing things through the eyes of the Indian performers.