We took a taxi from Mumbai Central to the domestic airport, about an hour away. Despite the wasted time at the station, we were now well ahead of schedule and changed our bookings to an earlier Jet Airways' flight. This was another ‘first’ for Pintu, who had never before been inside an aircraft.

His excitement as we boarded the aircraft, hurtled down the runway and took off was a joy to behold. He was fascinated by the view of clouds from above and, of course, I had to take photos to remind him of this memorable event. 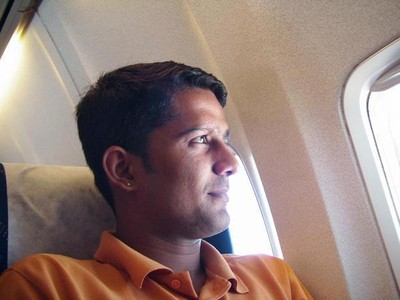 An anxious Pintu during his first ever take-off

The flight to Goa was scheduled to be an hour but only took about three quarters of that. The hotel, alerted to our earlier arrival by my telephone call from Mumbai, provided transport from Dabolim Airport to Bambolim Beach, a half-hour journey, mostly on good roads alongside green countryside of fields, paddy and woodland. This was my first visit to Goa, but I have seen beaches all over the world - unlike Pintu, who wore a great big smile as he glimpsed the sea for the first time in his life.

The Bambolim Beach Resort is technically in North Goa, although Central Goa would be more accurate as it’s only about 7 kms from Panjim (aka Panaji), the capital. The hotel is situated right on a sandy, palm-fringed beach and it’s made up of six accommodation blocks built in 1989 and a newer main building added in 1996. 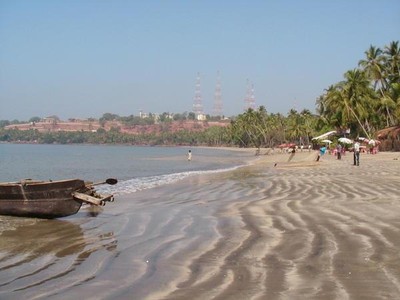 There are still a few fishermen on this stretch of beach

I had booked, on the Internet, what looked to be a good room but, although it was spacious, we could only see the sea by going out onto the balcony, turning right, and looking through the palm trees. We were moved to another room in one of the older buildings, without a balcony but right next to the sea and with great views from nearly every window. It was actually a suite of two rooms, so we had one each. There was only one bathroom - which required a plumber’s attention on three separate occasions until we could eventually walk in and out without paddling! This was to be our home for the next four days - four days in which to relax and talk without having to visit family and friends - a first for me on this trip!

We had to change Pintu’s homeward rail tickets. The hotel’s Internet facility was six times more expensive than a comparable service at a cybercafé in Panjim and wasn’t available until late in the evening anyway. I complained to the manager, who offered me his computer free of charge until he had to go home. I seized the opportunity, but discovered that cancellations of rail tickets can only be done at a station and not online. It refused to allow us to open relevant bits of the Indian Railways reservation site anyway, so we’ll have to go to Panjim station tomorrow. I used the computer to update a bit of my blog instead - until the connection had to be closed down. 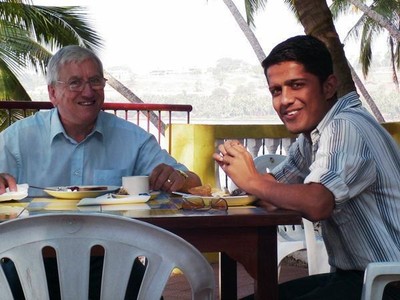 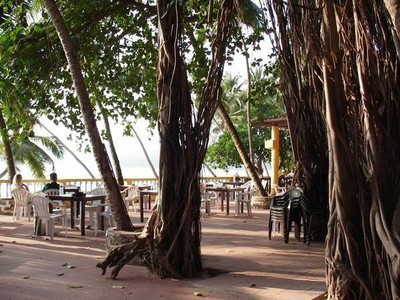 Breakfast by the beach the following morning was a real treat. The hotel’s open-air restaurant, where we’ll take all our meals buffet style, is a long terrace alongside the beach. It’s shaded by the biggest banyan tree I’ve ever seen, its long aerial roots reaching the ground over a vast area and forming the backdrop to a stage on which different musicians and dance troupes perform each night during dinner.

We had a substantial breakfast. Pintu usually has just dal or vegetables and chapattis at home but here he couldn’t resist trying some of the European-style food as well. This morning, he enjoyed an intriguing sandwich of two slices of toast spread with jam and containing an egg/tomato/cheese/onion/chilli omelette. He said it was delicious.

That ‘first’ was hotly followed by another - girls in bikinis, then yet another - a girl topless! The culture in Rajasthan is very conservative and, of course, there are no beaches there anyway.

It took all morning to change Pintu’s rail reservations. We took a taxi into Panjim - return cost, including two hours’ waiting was a relatively pricey 400 Rupees (£5). We found the reservation office upstairs inside the station. The process was torturous, bureaucracy at its worst. First, fill in a form for cancellation of the original booking, plus a form to book each of the other journeys. Then, queue at a window to buy a numbered ‘token’ for each form at a cost of 10 Rupees a go. Then sit down and wait for your token numbers to appear on the sign above the two ticket windows. Fortunately, the office was air-conditioned as we sat there for over an hour, tempted once by a tout’s offer to get us higher up the queue for a fee. When our numbers eventually came up, the rest was plain sailing and we successfully re-booked for Pintu to return to Jaipur via Vadodara.

Thought for the day:
The people of India have nothing, yet they have everything
In the nine years or so since I last visited this vibrant country, little has changed. There are now more people, more vehicles, more poverty, but the infrastructure seems to have changed very little. Despite an alleged growth in the middle class, poor housing, poor roads and generally poor living conditions remain evident. There are persistent beggars at every traffic light - said to make more money in a day than the average worker makes in a week; it’s difficult to ignore them (as nearly every Indian does), but giving money to one simply results in more outstretched hands and more embarrassment, so ignore them you must.

It’s just as difficult to ignore the hawkers who pounce on tourists to sell them anything from souvenirs to places higher up the queues but, with them at least, both parties seem to enjoy a good haggle and everyone wins.

Despite their lack of material wealth, the people remain friendly, hospitable and totally genuine. They will happily provide help or guidance. And smiling seems to be even more infectious than E.coli. 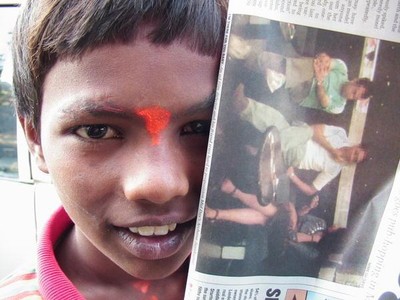