I had to prepare a plan, particularly as I only had two weeks to spare for my visit to India. I spent almost a month researching where I’d like to go and the most economical way to get there, then sent details to Lajpal

He wanted to go to Goa!

Well I suppose he would, wouldn’t he? - he’s from near Ranakpur in inland Rajasthan, currently living in the teeming city of Jaipur, and he’s never seen the sea! So Goa it would have to be.

We’ve also agreed to spend some time sightseeing and with his friends in Jaipur, and to then drive south to Sadri near Rankpur to visit his mum and dad, sister, uncles and aunts, and countless cousins. I fear I'll struggle to remember all their names - many of them sound so similar to the unfamiliar Western ear: Gajendra, Shivendra, Ravindra... If time permits, we’ll also try to meet up with the headmaster of the school where he earned his gold medal. 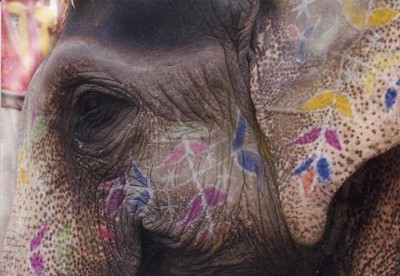 An elephant never forgets. Despite advancing years, I haven't forgotten this colourful elephant either (Amber 1997).


Making all our reservations was generally painless. I suppose I could have thrown the itinerary at a travel agent to handle but, having spent most of my working life in the travel industry, I decided to do it myself. I was born in Wembley, not far from Southall, both of which now have Indian populations to rival those of Delhi. A sweep of the Internet, followed by a quick call to Southall Travel found Virgin flights London to Delhi and Mumbai to London at unbeatable prices.

Registration on the Jet Airways website secured flights from Mumbai to Goa and back. I chose not to attempt buying Lajpal’s seat at the Indian Residents rate - which would have involved reconfiguring my computer to pretend it was in India rather than England - so paid for us both at the higher Foreign Nationals rate. More on this dual pricing scam another time.

Flights from Delhi to Jaipur seemed disproportionately expensive. The trains didn’t connect with my flight from the UK, so I'd have to waste time and money on a night stop in Delhi. And bouncing around in a bus really isn't my style. However, in an on-line travel forum, I found a recommended and very experienced driver/guide to take me from Delhi to Jaipur in his car, a Tata Indica. He’ll remain with us for our first week, returning to Jaipur in time for us to catch an overnight train to Mumbai - all at a fraction of the price of even the cheapest self-drive rental car in Europe, and with the convenience of transport on tap.

Hotel bookings were generally simple, although I was let down by my favourite AccomLine, an Australian hotel reservation company I’ve used several times before for hotel bookings in Europe; they have previously always provided such terrific deals. This time, however, they couldn’t even come up with a room at the hotel I wanted in downtown Mumbai, and instead offered me one which was over an hour away near the airport. So, I tried to book my preferred hotel direct by e-mail. It was confirmed immediately at the full public rate - which turned out to be 35%! lower than AccomLine’s advertised price! On reflection, perhaps they did me a favour. 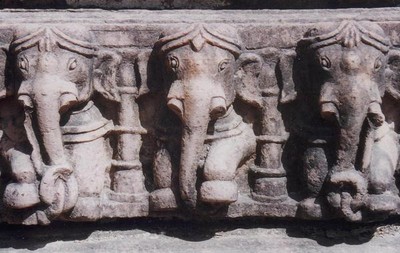 Elephants are everywhere. Some are real, others are just carvings. 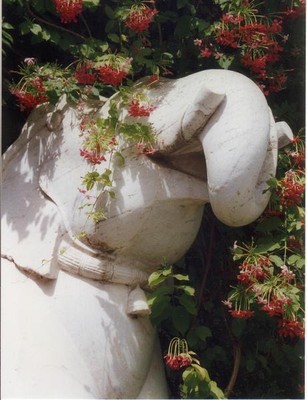 By far the most complicated and frustrating were the train reservations. We need to be in the right place at the right time and standing in line hoping for seats or sleepers from the foreign tourist quota on a particular train would have been a bit risky. We’ve all seen films of people hanging from the sides of Indian trains, so imagine what the station queues might be like in peak season.

Indian Railways have a website, which provides loads of useful information, as does The Man in Seat Sixty-One. There are eight different classes on Indian Railways, so it pays to know your stuff. There doesn't appear to be any difference in price for tourists (although I guess we usually buy seats in the higher priced classes anyway), there are discounts for senior citizens, and you can even request an upper or lower berth if you're booking a sleeper. To book trains in advance, I had to go to the Indian Railway Catering and Tourism Corporation website. Once registered, I found I could only book sixty days prior to travel, excluding the date of travel, and quotas seemed so small that I had to book almost as soon as seats went on sale at eight o’clock in the morning, Indian time. That’s 2.30 in the wee small hours of the morning GMT. Fortunately, at my age, I sometimes need to get up in the middle of the night anyway!

Except for bookings on a few prestigious trains, you can’t organise e-tickets. Also, you can’t arrange to pick up rail tickets at the station or have them sent to you outside of India. Fortunately, I’d already booked my hotel in Jaipur, so I e-mailed the manager authorising him to accept the tickets, and asked IRCTC to send them there. They were sent from Delhi to Jaipur by courier at no extra charge and they arrived within a few days. Imagine a British rail company doing that. In your dreams!