A first for Pintu 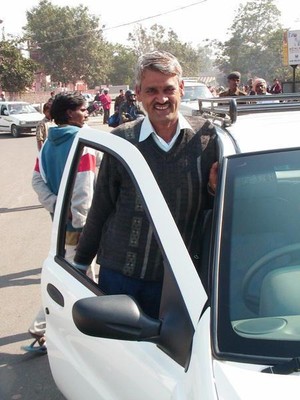 I’d hoped to update my blog this morning but, just as we arrived at the cybercafé, it was this district’s turn for its daily two-hour power cut. We could have gone in search of another café in a neighbouring district which might have had power but thought better of it and went to find somewhere to change some travellers’ cheques instead. The observant among you will note that my earlier blogs have since been updated with photos (on my return home!).

We said our thanks and goodbyes to Jai Singh when he dropped us off at the railway station in good time for our train to Mumbai (Bombay), leaving just after 14.00. He had proved to be a good and reliable driver - I can certainly recommend him to anyone planning to hire a car in Rajasthan (contact Mahavir Yadav, the owner of Rajasthan By Car).

This was not Pintu’s first time on a train, but it was his first ever ride in 1A Class (First Class Air-conditioned). I wouldn’t have considered travelling any other way, of course. 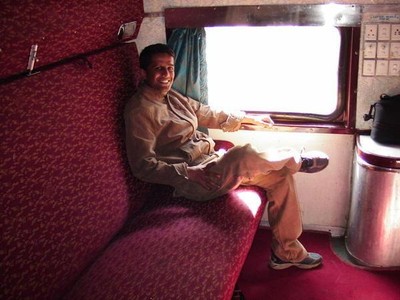 Our First Class Air-conditioned compartment - a first for Pintu.

To compare First Class on Indian Railways to its equivalent in the UK or most other developed countries would be a bit unfair. The carriages here are ancient, well used by an enormous population, and lacking refurbishment.

In our carriage, the First Class bit was made up of two four-berth compartments (each with only two occupants on this occasion) and one two-berth compartment (ours). The bench seat became the lower berth and the back opened out to form an upper berth. We had our own little washbasin and a non-opening window, plenty of lights, some fans and air-conditioning.

Adjoining the First Class area and separated by a door, was an open section of three-tier berths with curtains. Two carriage attendants slept on the floor of a storage area at one end, next to two toilets, one with a Western-style pedestal. Although the whole could have done with some redecoration, it was clean and perfectly acceptable. It was also very quiet - no clickety-clack, clickety-clack - and it maintained a steady pace throughout the night. I hardly noticed any of the dozen or so stops made at stations along the way.

The attendants brought us tea and a very tasty evening meal of rice, dal, vegetable curry and chapattis. The total cost for us both, including tea next morning, was a bargain 188 Rupees (just over £2).

The fare for the eighteen-hour journey, covering 1160 miles, was an even better bargain at around 2600 Rupees (£32.50) each, including Internet reservation fees.

Pintu studies at every opportunity. We had hardly pulled out of Jaipur when he settled down with a book about political thinkers, required reading for his MA Political Science course. After the attendants had cleared our dinner, they made up our berths with clean white sheets, pillows and blankets, and Pintu climbed up to the top bunk to continue his reading into the night. I slept for a few hours until we reached Vadodara (formerly Baroda) at about 1.30a.m. 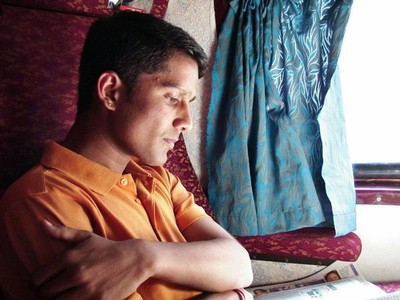 There's never a dull moment with a good book about political science!

Alerted by an earlier telephone call from Pintu, his cousins Shivendra (Shibbu) and Rameshver (Vinku), Khuman’s sons who are studying in Vadodara, were awaiting our arrival with three of their friends. Happy, smiling faces at that hour - oh to be young again! 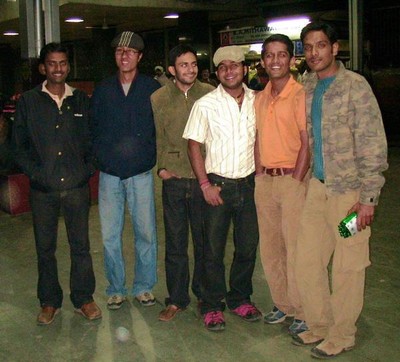 The train only stopped for a scheduled eighteen minutes but they had taken the trouble to come all the way out to the station to greet us and seemed reluctant to leave as the train pulled out. They persuaded Pintu to stop off for a day on his way home instead of travelling directly back from Mumbai to Jaipur. We’ll have to change his reservations accordingly.

The train reached Mumbai Central just after 8.15 the following morning, only a few minutes late. A porter, with one bag on his head and another over his shoulder - total weight around 45 kilos, took us to various places around the station in a quest for somewhere to change Pintu’s return reservations.

After trogging from queue to queue, finding forms, filling them in and getting them stamped, we decided - after an hour among the scrum of people trying unsuccessfully to do similar things - to give up and try to do it on the Internet from Goa instead.