India occupies only 2.4% of the world’s land area, yet it supports around 16% of the global population. With over a billion people*, its average population density is higher than any other nation of comparable size - and it continues to add the equivalent of Australia’s total population every year!

It should come as little surprise then that this overpopulation leads to severe economic hardship and, in turn, to diseases which we fortunate Westerners seldom, if ever, encounter. So, I’ve been careful to be prepared for disease. 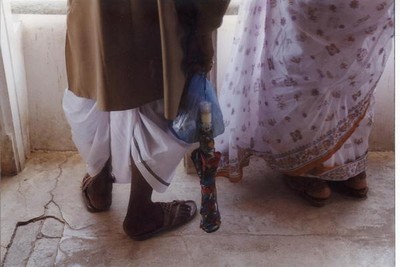 Tourists come from India too! With a billion people, the home tourism market is big.
By the way, that's a parasol he's carrying, not an umbrella. 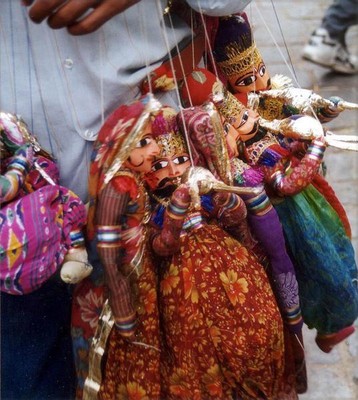 Like most NHS doctors’ surgeries, ours dispenses free inoculations against the most virulent of the nasties to which the people of India are routinely exposed. Jabs against diphtheria and tetanus in my left arm and typhoid in the right meant sleeping on my back for a couple of nights! Fortunately, my 1997 polio booster was up to date and the Hepatitis A jabs I had in '94 and '95 apparently gave me lifetime immunity.

All this for a fortnight away seems a bit OTT, but I know which of the two - the disease or the jabs - I prefer.

I had to pay for anti-malarial pills - two different types, two of one kind to be taken once a week and two of the others daily. The pharmacist only prescribed one sort of prophylactic** for India in '97. The mosquitoes seem to have improved their immunity since then!