On the way to Ranakpur

Today brought even more new discoveries. First, our driver took us to the block of apartments where Lajpal shares a room with cousin Ravindra. Small but comfortable, ideal for both of them to spend their time studying (which they both seem to do most of the time). 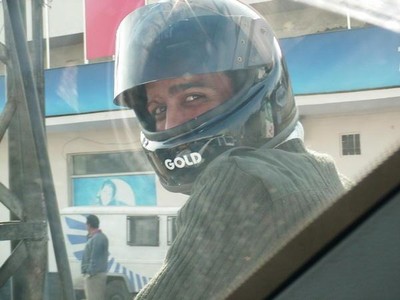 My first discovery was that the young man I knew as Lajpal or Goldy was actually known by everyone else as Pintu - and he’d never mentioned it to me before. Pintu was the pet name given to him by his family and it apparently means small, good looking and charming - all true of this shy young man. Ravindra was Chottu and Bhupendra was Montu. Oh, I’ll never remember all these names!

Pintu proudly showed me all his school and university certificates. I knew he’d done well but not about all the distinctions, particularly in all the subjects for which he had private coaching. He has a BA from the Rajasthan University and is currently studying for his MA in Political Science. We made a brief visit to the University campus, an impressive large campus, albeit in need of a lick of paint here and there.

After lunch, we drove up to Nahargarh Fort above Amber (pronounced Aam_mair). It seems that very few tourists venture this far after their elephant ride up to Amber Fort and we had the place more or less to ourselves. Pintu had never been here before, despite living in Jaipur for the past five years.

First a visit to Pintu’s aunt Jagdish, youngest of his mother’s six sisters. Such a warm welcome awaited me from Jagdish, her husband and their lovely three-year-old daughter Jolly (which wasn't her real name), her husband’s elderly mother and three sisters - all of whom live in a large old house in Jaipur’s suburbs. 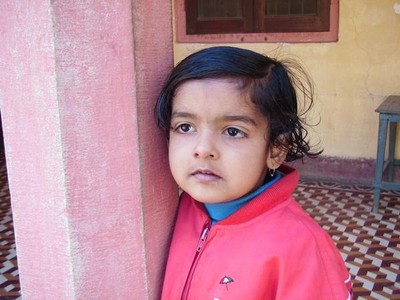 More photos were added to the collection which will be sent to Pintu on my return, before venturing off to the ‘monkey temple’ at Galataji - actually a temple to the sun god but with troops of monkeys living there.

This afternoon, we went to see a Bollywood movie at the Raj Mandir cinema. This is the most elaborately decorated cinema I’ve ever seen and it’s huge - a sight to be seen on its own and it was packed for the 3.30 p.m. showing of Dusit (appropriately ‘Friends Forever’) on a screen that must have been at least three times the size of the largest we have in the UK.

Next day, Thursday, we set at 6.00 a.m. for Gundoj, where Pintu’s uncle Khuman has his home - an ancient fort. Khuman (Thakur Khuman Singh Rathore to give him his correct title) is the manager of Maharani Bagh Orchard Retreat near Ranakpur. That’s where Pat and I first met Pintu all those years ago. I was also privileged to meet Khuman on several occasions during his visit to London two or three years ago.

At his fort, we met his charming wife Sailesh, his sister (who, of course, is another of Pintu’s mother’s sisters) Prakash, and, importantly, Pintu’s sister Purnima. Lunch, more pictures, and more gifts followed their warm welcome. 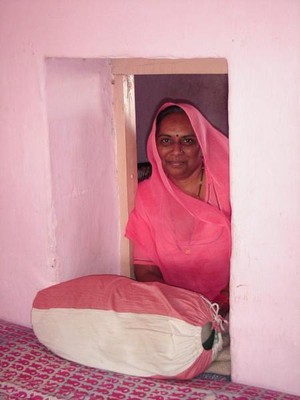 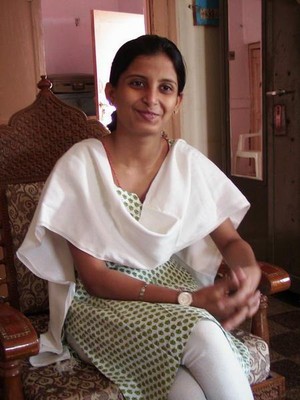 It really is wonderful to receive such a genuine welcome in all these people’s homes. It is something that an average tourist could never even contemplate receiving. Plus, I’m eating things I couldn’t hope to describe. All I know is that it’s delicious, it’s substantial, and it’s eaten with the right hand. By the way, the Travelan pills from Australia seem to be working well - not a sign yet of any Jaipur Jippy.

We continued to a new hotel/restaurant being constructed by Khuman nearby. It will be his own venture, strategically situated and initially operating as a restaurant. He also has plans to upgrade his fort at Gundoj to provide authentic accommodation to well-heeled tourists.

This evening we reached the Maharani Bagh Orchard Retreat, where we had a fascinating meal around the outdoor camp fire and I renewed my acquaintance with my friend and genial host Khuman. Pintu went off to stay for the next two nights with his parents in nearby Sadri.

More of this later. Must sign off now as the internet connection will soon be closed down - again!